The album is somewhat infamous for taking the band almost half a decade to produce. Work is said to have begun as early as 1982 (with the working titles of Technicolor and then Techno Pop), but the project was delayed due to band member Ralf Hütter suffering a cycling accident, and then due to concerns within the band that the production quality of the album was not sufficiently cutting-edge, necessitating much re-work. The album, mastered by Bob Ludwig, finally saw release in 1986. It is the last Kraftwerk album to feature Wolfgang Flür, who subsequently left the group in 1987.

The album was recorded in Düsseldorf with the Emu Emulator II sampler (used previously on "Tour De France" and the demo of "Techno Pop" album) and various contemporary devices including Yamaha FM-engines (such as DX-7) and digital effect processors. The final mixing was done at Right Track Studio in New York together with DJ Francois Kevorkian and Ron St. Germain. Also in America Kraftwerk and Kevorkian produced the single mix of "The Telephone Call" using the Synclavier system for the first time.

The first side of the album is instrumental without proper singing parts, relying instead on repeated spoken phrases. The side is divided into three tracks, but they may be taken to be one long piece of three variations with recurring elements. For instance, a few bars of melody from "Musique Non-Stop" can be heard as a few bars of bass melody in "Techno Pop". The songs "Techno Pop" and "Sex Object" feature partial Spanish-language lyrics. The second side also contains three songs, following a somewhat more conventional pop format. The song "The Telephone Call" (German version: "Der Telefon-Anruf") is notable for being the first and only Kraftwerk song to feature Karl Bartos on lead vocals. The album closes with the title track "Electric Café", which features French-language lyrics.

In 1982, Kraftwerk began work on a follow-up album to its successful and influential Computer World. This new album initially had the working title Technicolor, but this name had to be abandoned because that title was a trademark. The proposed title was changed to Techno Pop. The initial track listing consisted of four tracks. The first track, "Techno Pop", taking up one side of the LP, was an original one-track mix of "Boing Boom Tschak", "Techno Pop" and "Musique Non-Stop", as they appeared on the final album; the second track was "The Telephone Call", with the third being "Sex Object" and the final track being "Tour de France".

Recordings were progressing, and one song from these sessions, "Tour de France" was released as a single in 1983, achieving moderate commercial success. However, shortly after this, Ralf Hütter suffered a cycling accident on the Rhine Dam and was apparently unable to work with the band for some time.

EMI Records announced a release date for the Techno Pop album; promotional advertisements were released, and official catalog numbers were assigned to the project. "We were working on an album concept Technopop, but the composition was developed and we just changed the titles," Hütter explained. "It became Electric Café. But somebody within the record company went out and did a pre-order, we were working on the sleeve and some marketing idiot did this". To bide time while the band continued work on the new album, Autobahn was reissued in 1985 in a digitally re-mixed [sic] edition that subsequently marked the album's transition to compact disc the following year. By this time, Hütter & Schneider had regained the rights to the recording following the expiration of the group's original contract with Philips Records.

When work did recommence on the sessions, the band were reportedly concerned that the album's production was not of a sufficiently ground-breaking quality to match its reputation as sonic innovators. The final mix of the album was completely redone from scratch at least once, with Hütter eventually travelling to New York with the master tapes to work on them with producer François Kevorkian. The recordings were not released until 1986, under the new name Electric Café. The band had decided not to include the song "Tour de France" but instead to leave it as a stand-alone single: it had already been reissued in 1984, when Kevorkian had auditioned his production skills with a largely instrumental remix of the song.

When the album was remastered for re-release as part of The Catalogue, it underwent significant changes. Most obviously, it was renamed to "Techno Pop", the originally desired title (and name of one of the tracks on the album).

In addition, the song "The Telephone Call" was significantly abbreviated to its single form, and its remix (titled "House Phone") was added as an additional track.

The original 1986 sleeve notes are, like those in Computer World, unspecific regarding the precisely defined roles of contributors. The 2009 remaster credits give the following information:

Band member Wolfgang Flür is included in a subsequent general list of collaborators, but is not credited with a musical or production role in these recordings. 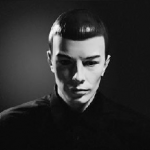